Department of Electrical Engineering, Ajman University of Science and Technology,

Orthogonal Wavelet Division Multiplexing (OWDM) has been considered as an alternative of Orthogonal Frequency Division Multiplexing (OFDM) in the recent years. OWDM has lower computational complexity and higher flexibility compared to its OFDM counterpart. The core component of OWDM is wavelet. Wavelet has been a much investigated and applied topic in digital image processing for a long time. Recently, it has drawn considerable attention of the researchers working in communication field. In this work we investigate the performances of OWDM under different channel conditions. We consider three channel conditions namely Additive White Gaussian Noise (AWGN), Rayleigh, Ricean, and frequency selective. We consider a number of wavelets namely Haar, Daubechies, Biorthogonal, Reverse Biorthogonal, Coiflets, and Symlets in OWDM design. For system model we choose Digital Video Broadcasting-Terrestrial (DVB-T). Originally DVB-T system was designed based on OFDM. In this work we use OWDM instead. The simulation results show OWDM outperforms OFDM in terms of bit error rate (BER), noise resiliency, and peak-to-average ration. The results also show that the Haar wavelet based OWDM outperforms other wavelets based OWDM system under all three considered three channel conditions.

Digital Video Broadcasting (DVB) was introduced by a consortium consisting of over 200 companies and regulatory bodies across Europe [1]. The main purpose was to convert analog television system into digital television system.  Initially, DVB was introduced for stationary signal reception by using rooftop antenna. Extensive researches demonstrated that DVB signal could be received by mobile devices [2]. Now-a-days, DVB is enjoying an enormous growth and is a very popular technology in digital video broadcasting. Till date many commercial versions of DVB system have been introduced. Among these DVB-S, DVB-C, and DVB-T have become very popular and they are being used in satellite, cable, and terrestrial networks respectively. These technologies have been described in detail in [3-4]. Since this work is based on DVB-T we present a summary features of DVB-T here for completeness of our work.

OFDM is a multi-carrier modulation (MCM) scheme [5-6]. The main principle of MCM is to divide the input bit stream into several parallel bit streams and then these bit streams are used to modulate several sub-carriers. OFDM employs densely spaced orthogonal sub-carriers and overlapping spectrums. Hence, it is considered as a spectrum efficient modulation scheme. Inverse Discrete Fourier Transform (IDFT) is used to implement the orthogonal signals generation in OFDM transmitter. On the other hand, Discrete Fourier Transform (DFT) is used in OFDM receiver to generate original signal from the received orthogonal signal.

OFDM has numerous advantages over other single carrier modulation schemes. The main advantage of OFDM is that it can minimize Inter Symbol Interference (ISI) originated from the multipath fading channel [7]. Hence, it can support a very high data rate. OFDM uses Fast Fourier Transform (FFT) and Inverse Fast Fourier Transform (IFFT) algorithms, which are computationally efficient. OFDM is also considered suitable for coherent demodulation. Additionally, OFDM can ensure the required Quality of Service (QoS) to the end users depending on the bandwidth. It is also considered suitable for diversity techniques (i.e., time diversity and frequency diversity).

OFDM has some disadvantages too. It requires a strong synchronization between transmitter and receiver. It is very much sensitive to phase noise and frequency offset. It is also not power efficient because the Fast Fourier Transform (FFT) algorithm and Forward Error Correction (FEC) algorithms need to be remained active all the time. It cannot utilize the advantages of the diversity gain when few sub-carriers are allotted to each user. It requires a high peak to average ration RF power amplifiers to avoid amplitude noise.

Alternatives of OFDM have been proposed in the literatures. Orthogonal Wavelet Division Multiplexing (OWDM) is one of them. The advantages of OWDM over OFDM have been addressed in [8]. Some of the advantages are worthwhile to mention here. Increase in flexibility, decrease in computational complexity, and increase in noise resiliency are top at the list. Compared to OFDM system OWDM allows more parameters to be varied. In OWDM each subcarrier can have its own coding and modulation. In OWDM more error correction can be applied to the affected sub-bands. Hence, OWDM is more resilient to frequency selective fading.

In this work we investigate the performances of OWDM under different channel conditions. We also consider three channel models namely AWGN, Rayleigh fading, Ricean channel, and frequency selective. We consider DVB-T as a system model. Originally DVB-T system was designed based on OFDM. In this work we use OWDM instead. In order to implement OWDM based DVB-T, we replace OFDM system shown in Fig.1 with an OWDM system. In OWDM system design we consider a number of wavelets namely Haar, Daubechies, Biorthogonal, Reverse Biorthogonal, Coiflets, and Symlets. The rest of the paper is organized as follows. The basic principle of OWDM has been presented in section 2. The wavelet families and their properties have been presented in section 3. The simulation model and results have been presented in section 4. The paper has been concluded with section 5.

In another early work [8] the author has argued that the wavelet-based OFDM is more computationally efficient compared to Fourier-based OFDM system. The author also show that wavelet-based OFDM is also more flexible and noise resilient compared to Fourier-based OFDM system. A number of wavelet families namely Symlet, Coiflet, Daubechies, and Haar have been investigated in the same work. A comparison of the performances of wavelet families has been presented in this work. It has been shown that the Haar wavelet is the best choice for DVB-T system. Only AWGN channel model has been considered in this work.

It has been shown in [16] that the wavelets can be favourably applied in all aspects of digital wireless communication system including transceiver design, denoising, channel coding, and channel modelling. The authors conclude that DWT-OFDM has less error and lower PAPR compared to FFT-OFDM. In addition cyclic prefix (CP) can be avoided in DWT-OFDM and hence it can become more bandwidth efficient compared to FFT-OFDM. The authors argue that approximately 20% of the bandwidth of FFT-OFDM can be saved in DWT-OFDM for not using CP. An addition bandwidth saving of 8% can also be achieved by not using pilot tones. In [17] better wavelet packet tree (BWPT) structure has been proposed for wavelet-based OFDM system. A brute force search algorithm has been used to obtain BWPT structure. The authors suggests Daubechies (dB) wavelets for implementing WOFDM. They argue that Daubechies based WOFDM reduces PAPR without any additional complexity because of BWPT structure. A novel dual–tree complex wavelet transform (DT-CWT) scheme has been proposed for OFDM in [18]. The authors have shown that the proposed scheme shows better performance in terms of BER and PAPR than the conventional OFDM.  The other advantage of DT-CWT is that it has less computational complexity and it eliminates CP due to the good orthogonality and time frequency localization property.

Orthogonal Wavelet Division Multiplexing (OWDM) has been considered as an alternative of OFDM. Wavelet functions are used in OWDM. Now-a-days, wavelets are being commonly used in signal processing and communication systems instead of Fourier transform. The main advantage is that the wavelet can provide accurate information about the fast fluctuations of the signals in the time domain. It maps a time functions into two functions namely scale, a and translation, b. The continuous wavelet transform (CWT) of a signal x(t) is defined as

where W(a,b) is the wavelet transform and ψab(t) is called the mother wavelet, which is defined as

A scaled version of the function ψ(t) with a scale factor of a is defined as ψ(t/a). A number of mother wavelets have been reported in the literatures. Since we focus on a digital system in this paper, we use Discrete Wavelet Transform (DWT) instead of CWT.

It has been shown in [9] that it is possible to reconstruct DWT from CWT by using a bank of high-pass filters and low-pass filters as shown in Fig.2. In this figure three sub-bands decomposition has been depicted. In real life more sub-bands decomposition is performed. The filters generate more data by convolving the input signal with filter impulse response. Hence, down sampling operation is done during decomposition by discarding the alternate samples. The synthesis process of the decomposed DWT signal is also depicted Fig.2.  In order to compensate the down-sampling operation done during decomposition, up-sampling is done in wavelet synthesis by inserting zeroes in the data. The wavelet transform contains both frequency information and time information. Hence, it can convey a high data rate within each sub-band.

,where {Sm n} are the wavelet coefficients and ψ(t) is the wavelet function that is compressed m times and shifted n times for each subcarrier. In the receiver the inverse operation (i.e., discrete wavelet Transform) is done. The output of discrete wavelet transform (DWT) is represented as

The output signal {Sm n} is then decoded to data and applied to QAM modulator. In this work we use 4-QAM modulator.

Fig. 2 The Wavelet decomposition and synthesis [9]

4.The Wavelet Families And Their Properties

Fig.3 The wavelets and their families [12]

Table 1: The properties of wavelet families

5.The Simulation And Results

The DVB-T transmitter and receiver models presented in [13] have been used in this investigation. Since the number of carriers in DVB-T system is 1705, we consider 1705 4-QAM symbols as the input data to the transmitter model. We use a bandwidth of about 7.61 MHz. The carrier frequency we choose is 90 MHz.  The other parameters of the simulated system are listed in Table 2.

Fig.6 The performances of wavelet based DVB-T systems.

Fig.7(a) The simulation results of Haar Wavelet based DVB-T system

Fig.7(b) The simulation results of Daubechies Wavelet based DVB-T system 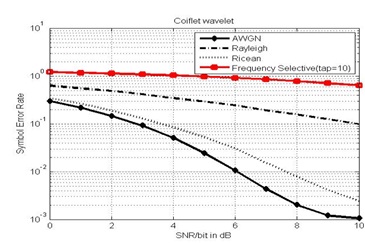 Fig.7(c) The simulation results of Coiflets Wavelet based DVB-T system 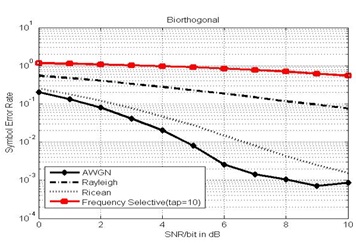 [15]   Vidushi Dagour , and Prabhat Patel, “Performance of Wavelet Transform based OFDM and Application to DVB system”, International Journal of Innovative Research in Science,Engineering and Technology, Vol. 4, No. 8, August 2015, pp. 6760-6767