Two way relaying for Multiple Input Multiple Output (MIMO) systems has been considered in [1-5]. Receive and transmit diversity improves the performance of TWR. At the receiver, the best antenna can be selected (Selection Combining SC). The corresponding Signal to Noise Ratio (SNR) is the maximum of SNRs over all antennas. It is also possible to combine the signals of all antennas using Maximum Ratio Combining (MRC). The SNR will be the sum of all SNRs [1-5]. TWR with Energy Harvesting (EH) consists to use the Radio Frequency (RF) signal to charge the battery of nodes [6-10]. Relays with EH capabilities has been studied in [6-10]. In order to enhance the throughput especially at low SNRs, channel coding is required in TWR [11-13]. Secure two way relaying has been suggested in [14-20]. Security aspects of TWR should be studied to avoid data recovery by a malicious node. The main contribution of the paper is to optimize packet length so that the throughput at node N1 or N2 is maximized. In all previous studies, a Fixed Packet Length (FPL) is used [1-20]. This is the first paper to suggest an Optimal Packet Length (OPL) for TWR with Energy Harvesting.

The system model is shown in Fig. 1. There are two nodes N1 and N2 communicating information to each other through a relay R. Node N1 transmits data to node N2 and at the same time node N2 is also communicating data to N1 through relay R. N1 and N2 transmit over the same channel.

where0< < 1 is harvesting duration percentage, Pi (resp. Ei) is the transmit power (resp. symbol energy) of node Ni and hN1R (respectively hN2R) is channel coefficient between nodes N1 (respectively N2) and R: p = T=Ts is the number of symbols per frame T. We have EX = TsPX
– During the second time slot with duration (1 − )T=2, N1 and N2 transmit data to node R over the same channel. This is the multiple access phase. The received signal at R is written as

where Ei is the transmitted energy per symbol of node i with 1≤ i ≤ 2, xi(j) is the j-th transmitted symbol by node Ni and nR(j) is an Addivite White Gaussian Noise (AWGN)

with variance N0. A Rayleigh block fading channel is assumed where the channel remains constant over all the time frame with duration T.
– During the third time slot with duration (1 − )T=2, R transmits amplifies the received signal to nodes N1 and N2. This is the broadcast phase.
Relay R uses the harvested energy E to amplify the received signal yR(j) to N1 and N2: The transmit symbol energy of R is equal to the harvested energy E devided by the number of transmitted symbols during (1−)T=2 seconds i.e. (1−)T=(2Ts) = (1−)p=2 with p = Ts=T :

Using (43), the amplification factor G used by relay R is written as

The received signal at N1 is written as

Node N1 removes the self interference,

since it knows the value of symbol x1(j): After removing self interference, we obtain

The SNR at N1 is written as

Using the expression of amplification factor G (45), we deduce

We assume that channels are reciprocal i.e. hN1R = hRN1 . By neglecting the term in N2 0 and using (44), the SNR at node N1 lower bounded by

This upper bound is tight at high average SNR as the term N2 0 can be neglected. We can write

The received signal at N2 is written as

Using the expression of amplification factor G (45), we deduce

2.3 Two way relaying in the presence of multiple relays

Figure 2. Two way relaying with Energy harvesting in the presence of K relays

The SNR at node N1 is lower bounded by

The SNR at node N2 is lower bounded by 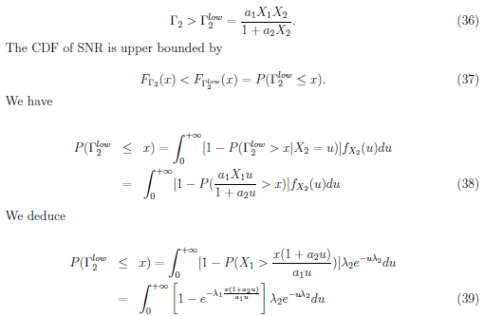 In this section, we derive the expression of the average Packet Error Probability (PEP).The PEP can be tightly upper bounded by [21]

where FΓ (γ) is the Probability Density Function (PDF) of SNR Γ and w0 is a waterfall threshold.

For uncoded M-QAM modulation, we have 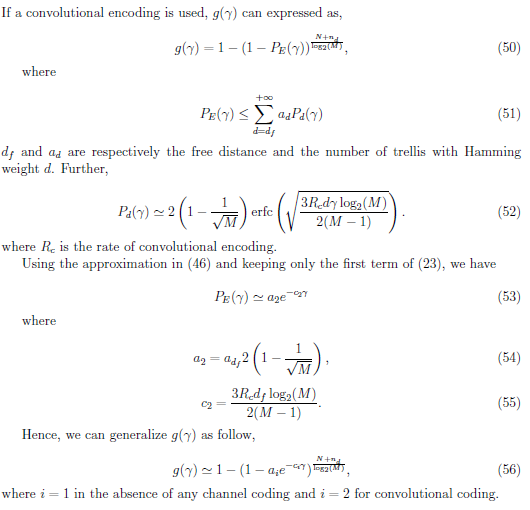 The average number of attempts of HARQ protocols is equal to

Simulation results were obtained using MATLAB as a simulation environment.

Simulation results were performed by measuring the Packet Error Rate (PER) to deduce the throughput. The packet error rate is the number of erroneous packets/number of transmitted packets. We made simulation until 1000 packets are erroneously received.

Fig. 3 and 4 show the throughput at node N1 for α = 1/3, a QPSK modulation for average SNR 10 and 20 dB. The distance between all nodes is equal to 1. We notice that we can maximize the throughput by choosing the packet length. Also, the throughput increases as the number of relays increase due to cooperative diversity. In fact, we always select the relay with the largest SNR. Finally, by comparing Fig. 3 and 4, we observe that packet length should be increased as the average SNR increases. There is good accordance between theoretical and simulation results.

as studied in [1-20]. These results correspond to throughput of N1 for α = 1=3. They were obtained using MATLAB for a 64 QAM modulation. In fact, the proposed optimal packet length allows maximizing the throughput. If the SNR is low, the packet length is decreased. However, at high SNR, we can increase packet length.

In this paper, we suggested enhancing the throughput of Two Way Relaying (TWR) with energy harvesting. We derive the best packet length that yields the largest throughput at node N1 or N2. Our study is valid for energy harvesting systems where the relay harvest energy from RF signals transmitted by source nodes N1 and N2. We have shown that the proposed TWR with best packet length offers better throughput than previous studies. Also, the throughput can be enhanced by increasing the number of relays. The proposed optimal packet length can be used in Wireless Sensor Networks (WSN) with two way relaying.

Appendix A : We have