This paper studies the emerging wireless energy harvesting algorithm dedicated for machine type communication (MTC) in a typical cellular network where one transmitter (e.g. the base station, a hybrid access point) with constant power supply communicates with a set of users (e.g. wearable devices,sensors). In the downlink direction, the information transmission and power transfer are conducted simultaneously by the base station. Since MTC only transmits several bits control signal in the downlink direction, the received signal power can be split into two parts at the receiver side. One is used for information decoding and the other part is used for energy harvesting. Since we assume that the users are without power supply or battery, the uplink transmission power is totally from the energy harvesting. Then, the users are able to transmit their measured or collected data to the base station in the uplink direction. Game theory is used in this paper to exploit the optimal ratio for energy harvesting of each user since power splitting scheme is adopted. The results show that this proposed algorithm is capable of modifying dynamically to achieve the prescribed target downlink decoding signal-to-noise plus interference ratio (SINR) which ensures the high reliability of MTC while maximizing the uplink throughput.

Recent years, wireless power transfer is emerging as a possible solution to address the power supply issue in wireless communications. Conventionally, terminals in wireless networks are powered by fixed energy supplies, e.g. power lines and batteries. But for most mobile terminals and remote deployed terminals (e.g. temperature sensor and wind speed monitor), they are mainly supplied by batteries, which extremely limits the lifetime [1]. However, sometimes because of the unreachable deployment location, it is impossible or extremely difficult to replace or charge the battery. Thus, wireless energy transfer is considered as an alternative solution to extend the working time of the network by transfer unlimited power via a wireless method.

In [2], Wireless power transfer techniques are summarized into three categories: RF energy transfer, resonant inductive coupling and magnetic resonance coupling. Compared with the other two coupling related techniques, RF energy transfer outperforms in terms of effective distance. Note that in this paper,we only focus on this RF energy transfer technique. In [3], an orthogonal frequency division multiple access (OFDMA) system with simultaneous wireless information and power transfer is considered. The tradeoff between energy efficiency, system capacity, and wireless power transfer are achieved by developing suboptimal iterative resource allocation algorithms. In [4], the authors consider both delay and mobility with wireless energy harvesting. Three issues including optimal transmission policy for the mobile node, energy management strategy and deployment of wireless power sources are solved. In [5], a point-to-point wireless link over the narrowband flat-fading channel with time-varying co-channel interference is considered. Time switcher is used at the receiver side to switch between information decoding and energy harvesting based on the instantaneous channel and interference condition. Various
trades-offs between wireless information transfer and energy harvesting are achieved.

Game theory has been widely used as an effective approach to solving resource allocation problems. A Multiservice Uplink Power Control game (MSUPC) is formulated in [9] and the cost function of each user is designed to maximize its own utility. Besides, some optimal power allocation schemes using game theory are proposed in [10], [11] and [12] by considering different network scenarios. In addition, game theory is also used to handle joint resource allocation problems. [13] considers both utility-based uplink transmission power and rate allocation in a non-cooperative game model with pricing. [14] proposes a utility function representing its perceived satisfaction with respect to its allocated power and rate.

In this paper, game theory is utilized to derive the balancing ratio for energy harvesting out of the total received power for future MTC networks. Most of the existing works discuss optimal time allocation, throughput maximization and various trades-offs between energy efficiency, capacity and wireless power transfer. Different from these existing papers, our main contributions are listed below.

Our solution indicates that in order to ensure the high reliability of MTC, a cell edge machine with poor channel condition utilizes the majority of received energy to do harvesting while a cell center machine with good channel condition utilizes majority of received energy to do information decoding. As a result, the uplink throughput of a cell edge machine is lower than that of a cell centre machine since the harvest-then-transmit protocol is used here. Additionally, the value of target decoding SINR affects the performance of this system as well. When the target decoding SINR increases, the uplink throughput decreases so that more received energy can be used for decoding.

A game model consists of three essential elements: player, strategy and utility function. In this paper, each device is regarded as a player participating in this game. The energy harvesting ratio θi is assumed

Providing that the interference and noise can be measured at the receiver side, we can get

So far, we have obtained the energy harvesting control iteration function and the convergence is proved in the next subsection.

For an iterative algorithm, it needs to achieve a stable value after some iterations. In [15], the authors show that when convergence is achieved, three properties need to be satisfied. The proof of convergence is showed as follows 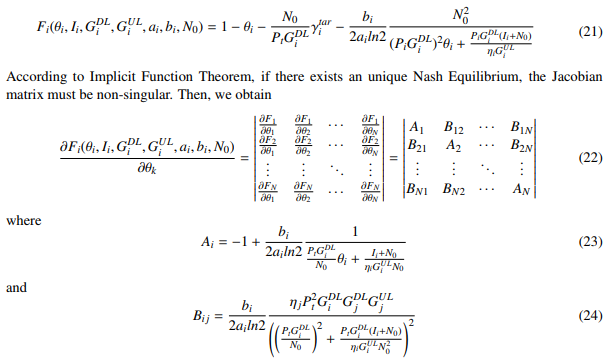 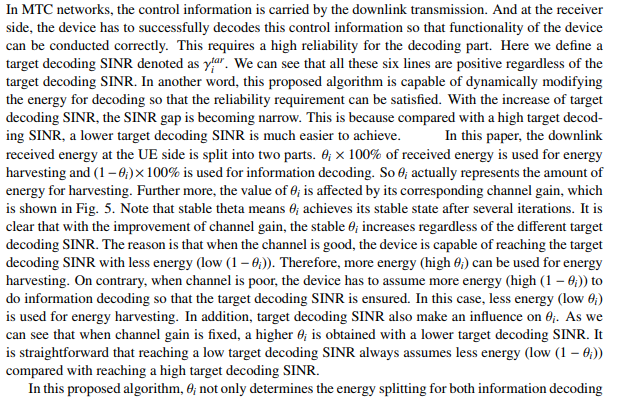 In this paper, an energy harvesting control algorithm is proposed for future wireless powered MTC networks by involving a non-cooperative game model. This algorithm takes both downlink and uplink transmission into consideration. In the downlink direction, the device splits the received energy into two parts: the information decoding part and the energy harvesting part. Because of the harvest-thentransmit protocol, the harvested energy is in turn used for uplink transmission. Since the high reliability of MTC has to be satisfied with the highest priority, we firstly ensure the downlink decoding SINR achieve the prescribed target decoding SINR, and then we improve the uplink throughput as much as

This entry was posted on October 5, 2018 by IJCNC JOURNAL.